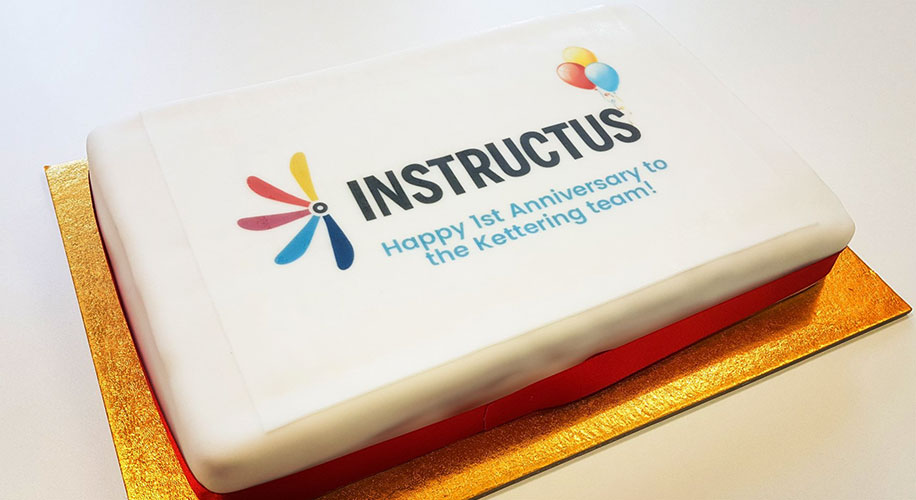 Today marks one year since the official opening of the Instructus head office in Kettering, Northamptonshire. Given the significance of the milestone we’ve taken some time out to reflect on what we’ve achieved so far – and to take a look towards what the future holds…

Moving a business from one part of the country to another is never a straightforward process, but when it became a necessity to change premises CEO Andrew Hammond and the Board of Trustees could see the benefit of looking beyond the M25.

“We knew we wanted more space both for our core work, but also for our subsidiaries to utilise,” Andrew explains when talking about the factors leading to the move.

“Once the decision to relocate was made we evaluated a number of options taking into account such factors as cost, growth, access to population, access to transport, employee availability and access to those staff remaining in the business. As a result, we chose Kettering.”

The move presented an opportunity to review and revise the skillsets in the business, and in the months before the move the management team worked hard to identify and recruit a specific blend of roles and personalities. When the new team came together for the first of two induction days on 13th June 2017, it was the first sign of how well this process had gone.

Digital Marketing Executive Joe Burden remembers the induction well. “Having worked for several different organisations before, the approach that Andrew, Damian and the rest of the management team took towards building a shared culture and environment was a real eye opener.”

“What’s made the biggest difference is how hard they’ve worked to keep their promises and keep the positive environment that we’ve built. Everyone feels a shared ownership of what we do here, and that makes it a great place to work.”

For an organisation dedicated to creating and promoting opportunity, one of the biggest successes of the last 12 months has been the way that we’ve aimed to live our values.

“Instructus is an amazing place to work”, says Fiona Nichol, now Finance Assistant. “When I started I was a Business Support Administrator and within six months of working here I was promoted to Finance Assistant, being first point of contact for staff and customers with regards to invoices and other finance issues.”

“I have been in this role for just over six months now and I love it.”

Francesca Cardew has had a similar experience. “My role has developed massively since I’ve started, more than I thought it would!”

“When I joined my role was a Business Support Administrator, and now I’m the Business Admin Team Leader. Before my main responsibility was processing certificate claims and being first responder for training providers, however now I’ve developed there’s a few (by which I mean a lot) more reports to do – not to mention keeping the Operations team on track.”

“I do feel I’m able to make a difference in my role. As a team we help learners to achieve their goals, while personally I get to plan charity events for the whole company and get us to help in the community.”

While a big part of our time this year has been spent developing the internal culture, we’ve also worked hard to make sure that people outside the charity understand who we are and what we do. The tail end of last year saw the launch of new sites for our subsidiary companies the Springboard Consultancy and Instructus Skills, while the new Instructus site you’re presently on went online in March.

Rebuilding these platforms has been key for us as we start fulfilling our charitable aims, but that’s only part of the process. The real accomplishment has been the support that we’ve been able to give to Streetwise, Karma Nirvana and Reducing the Risk of Domestic Abuse, three charitable support projects that have already started to yield exciting results. And this is still just the very start. Behind the scenes we’ve been putting some serious thought into how we can best help to create more opportunities for those who have been underserved and left behind, with one major project about to enter its next phase. The way we intend to deliver on our commitment to our charitable aims is through the hard work and dedication of our team, a message embodied by Andrew’s definition of our success over the last 12 months.

“There’s so much to be proud of, but ultimately it’s our people. We’ve collectively created a great culture and working environment and have built a fantastic team who are performing exceptionally well.”

“The last year has felt like a new beginning for the organisation, and I firmly believe we have built a strong cornerstone for our collective growth for the future, both organisationally and individually.”

Our first year in Kettering has been a success. Here’s to many more like it!

You can find out more about which cookies we are using or switch them off in settings.

This website uses cookies so that we can provide you with the best user experience possible. Cookie information is stored in your browser and performs functions such as recognising you when you return to our website and helping our team to understand which sections of the website you find most interesting and useful.

Strictly Necessary Cookie should be enabled at all times so that we can save your preferences for cookie settings.

If you disable this cookie, we will not be able to save your preferences. This means that every time you visit this website you will need to enable or disable cookies again.